The particularities of Turing’s description of Turing Machines are not relevant. You can envision a different way to implement the same general computing device. Indeed, alternative models of computation exist, such as “lambda calculus” and “cellular automata” (Fernández, 2009). The crucial part of Turing’s proposal was the articulation of a machine capable to implement any computable program. The computable part of the last phrase is important because as Turing demonstrated, there are functions that can not be computed, like the Entscheidungsproblem (a famous problem in mathematics formulated by David Hilbert in 1928), one of the problems that motivated Turing’s work in the first place.

The advances in computability theory inspired a new generation of researchers to develop computational models in the study of cognition. Among the pioneers were Warren McCulloch and Walter Pitts, who in 1943 proposed that biological neurons can be described as computational devices. In a way, this is another iteration to the problem of describing a general-purpose computation device. This time, inspired by how biological neurons work, and with an architecture significantly different than Turing Machines.

The heart of the McCulloch and Pitts idea is that given the all-or-none character of neural activity, the behavior of the nervous system can be described by means of propositional logic. To understand this, let’s examine that main components of biological neurons:

Figure 2 shows an abstract scheme of the main components of two neurons and their synapses.

Footnote 1: a detalied examination of the Turin Machine is beyond the scope of this tutorial. For an extended explanation of Turing Machines see https://plato.stanford.edu/entries/turing-machine/#DefiTuriMach

Neurons communicate with each other by passing electro-chemical signals from the axon terminals in the pre-synaptic neuron to the dendrites in the post-synaptic neuron. Usually, each neuron connects to hundreds or thousands of neurons. For a neuron to “fire”, certain voltage threshold must be passed. The combined excitatory and inhibitory input received by the post-synaptic neuron from the pre-synaptic neurons determines whether the neuron passes the threshold and fires. Is this firing or spiking behavior that McCulloch and Pitts modeled computationally. Furthermore, by carefully calibrating the combination of inhibitory and excitatory signals passed to a neuron, McCulloch and Pitts were able to emulate the behavior of a few boolean functions or logical gates, like the AND gate and the OR gate. Thinking in this process abstractly, neurons can be seen as biological computational devices, in the sense that they can receive inputs, apply calculations over those inputs algorithmically, and then produce outputs.

The main elements of the McCulloch-Pitts model can be summarized as follow:

McCulloch and Pitts decided on this architecture based on what it was known at the time about the function of biological neurons. Naturally, they also wanted to abstract away most details and keep what they thought were the fundamentals elements to represent computation in biological neurons. Next, we will examine the formal definition of this model. 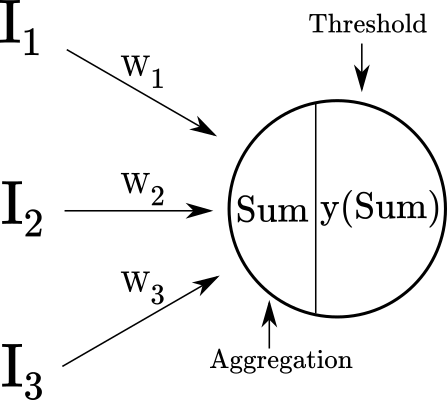 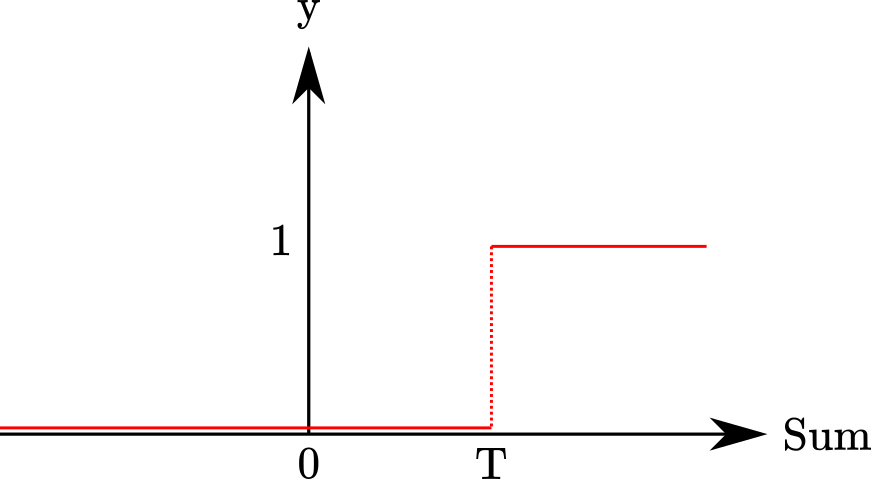 Note: It is important to highlight that the only role of the “weights” in the McCulloch-Pitts model, as presented here, is to determine whether the input is excitatory or inhibitory. If you are familiar with modern neural networks, this is a different role. In modern neural networks, weights have the additional role of increasing and decreasing the input values. From that perspective, the McCulloch-Pitts model is actually unweighted.

Implementing the McCulloch-Pitts artificial neuron in code is very simple thanks to the features offered by libraries of high-level programming languages that are available today. We can do this in four steps using python and numpy:

Step 2: compute the dot product between the vector of inputs and weights

Understanding how logical thinking works has been one of the main goals of cognitive scientists since the creation of the field. One way to approach the study of logical thinking is by building an artificial system able to perform logical operations. Truth tables are a schematic way to express the behavior of boolean functions, which are essentially logical operations. Here, we will use the McCulloch-Pitts model to replicate the behavior of a few boolean functions, as expressed in their respective truth tables. Notice that I’m using the term “function” to describe boolean logic, but you may find that the term “logic gate” is also widely used, particularly in the electronic circuits literature where this kind of function is fundamental.

The AND function is “activated” only when all the incoming inputs are “on”, this is, it outputs a 1 only when all inputs are 1. In “neural” terms, the neuron fires when all the incoming signals are excitatory. On a more abstract level, think in a situation where you would decide that something is “true” or you would say “yes”, depending on the value of some “conditions” or “variables”. This relationship is expressed in Table 1.

Table 1: Truth Table For AND Function

Now, imagine that you are deciding whether to watch a movie or not. In this simplified scenario, you would watch the movie only if the movie features Samuel L. Jackson AND the director is Quentin Tarantino. Now the truth table looks like this:

As we mentioned, the AND function can be implemented with the McCulloch-Pitts model. Each neuron has four parts: inputs, weights, threshold, and output. The inputs are given in the Movie Decision Table, and the output is completely determined by other elements, therefore, to create an AND function, we need to manipulate the weights and the threshold. Since we want the neuron to fire only when both inputs are excitatory, the threshold for activation must be 2. To obtain an output of 2, we need both inputs to be excitatory, therefore, the weights must be positive (i.e., 1). Summarizing, we need:

Note: in case you are wondering why multiplying a 4x2 matrix by a 1x2 vector works, the answer is that numpy internally “broadcast” the smaller array to match the shape of the larger array. This means that the 1x2 is transformed into a 4x2 array where each new row replicates the values of the original 1x2 array. More on broadcasting here.

We defined this already, so we will reuse our linear_threshold_gate function

As expected, only the last movie, with Samuel L. Jackson as an actor and Quentin Tarantino as director, resulted in the neuron firing.

Table 3: Truth Table For OR Function

Imagine that you decide to be flexible about your decision criteria. Now, you will watch the movie if at least one of your favorite stars, Samuel L. Jackson or Quentin Tarantino, is involved in the movie. Now, the truth table looks like this:

Since we want the neuron to fire when at least one of the inputs is excitatory, the threshold for activation must be 1. To obtain an output of at least 1, we need both inputs to be excitatory, therefore, the weights must be positive (i.e., 1). Summarizing, we need:

Neither the matrix of inputs nor the array of weights changes, so we can reuse our input_table and weights vector.

Since neither the matrix of inputs nor the vector of weights changes, the dot product of those stays the same.

We can use the linear_threshold_gate function again.

As you can probably appreciate by now, the only thing we needed to change was the threshold value, and the expected behavior is obtained.

The OR function is “activated” when all the incoming inputs are “off”. In this sense, it is the inverse of the OR function. In “neural” terms, the neuron fires when all the signals are inhibitory. This relationship is expressed in Table 5.

Table 5: Truth Table For OR Function

This time, imagine that you got saturated of watching Samuel L. Jackson and/or Quentin Tarantino movies, and you decide you only watch movies where both are absent. The presence of even one of them is unacceptable for you. The new truth table looks like this:

The matrix of inputs remain the same, but we need a new vector of weights

The function remains the same.

One more time, we obtain the expected behavior: when both, Jackson and Tarantino are absent, the neuron fires.

Limitations of the McCulloch-Pitts Artificial Neuron

Many other boolean functions can be emulated with this simple, yet versatile model. Nonetheless, it has many limitations. Among the main ones are:

The McCulloch-Pitts artificial neuron was a significant first step in the development of artificial neural network models of cognition. Interestingly, it lacks two elements that are at the core of modern artificial neural networks: (1) it works with binary inputs and outputs, instead of arbitrary real-valued numbers, and (2) it does not incorporate a learning algorithm, which limits its functionality to problems that can be derived by the modeler. That being said, this model was a remarkable creative achievement to the extent that blended insights from theoretical computer science, logic, neuroscience, and cognitive psychology.

An important remaining question is to what extent the McCulloch-Pitts artificial neurons says something substantial about human cognition. Although is true that this model was able to perform logical inference as humans do, it is not clear that the procedure is indeed similar to what is going on in the human mind. Part of the credibility of this approach comes from the fact that it is based on the observed behavior of biological neurons. If you come from the perspective that cognition is whatever the brain is doing, you have a starting point to validate this model. Now, binary threshold functions are an extremely simplified model of what brains do. Is this a good enough model of neurocognitive function? Probably not. As we know today, the behavior of ensembles of neurons is incredibly complex, to the point that it is hard to even conceive a complete model of brain function. That being said, it would be unfair to judge this model against such standards. As we mentioned in the introduction, computational models of cognition do not pretend to be a replica of the mind. From that perspective, it is undeniable that the McCulloch-Pitts model provided important insights into how to use this approach to better understand human cognition.